An update to the synod on the situation in San Angelo, Texas:

As with the rest of Texas, San Angelo has experienced very unusual weather and circumstances over the last week. Last Sunday we received a record snowfall and our second lowest-ever temperatures. We experienced three days of rolling power outages, though some of our members went three or more days without. Parts of the city (where my family as well as other members live) have been without any water since Tuesday night. It has not yet been restored. This is due to numerous breaks in the water main throughout the city. Yesterday the city started providing water for flushing toilets at least. Abilene (near which some of our members live) also suffered hardship. The city ran out of water early in the week and the news reported multiple houses burning to the ground as firefighters looked on without any access to water.

In addition to these widespread issues, some of our own members suffered specific hardship. One of our members was evacuated from her apartment building by fire marshal order due to flooding (from burst pipes). Another member’s building where he works as a nurse practitioner has been closed due to flooding. We are very thankful that the building we rent has been spared any damage. We also thank the Lord that though some of our members suffered (and some are still suffering) hardships, they have been spared any bodily harm.

Please join us in offering prayers and thanks to our God for bringing us through this week of hardship. The ice and snow have thawed and temperatures are rapidly rising. Please join us in praying for those in San Angelo, Abilene, and throughout Texas who are still dealing with the difficulties of this week, as well as those who have been less fortunate – those who have lost loved ones, and those who suffered costly damage.

What a comfort to know the refuge and strength we have in our God who is always with us, and who won us a permanent home in heaven by the gift of his son Christ Jesus. 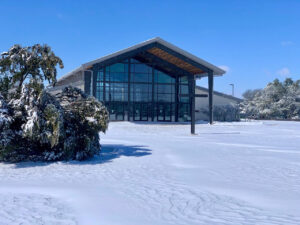 Here is an update on the situation for Hope Lutheran Church in Leander, Texas.

This is an area that can go for years without anything resembling a winter weather event. There are few snowplows, insignificant supplies of road salt and sand, and most houses are built for hot weather and have uninsulated pipes.

In recent days we have been hit by at least four different and significant events. Freezing rain, six inches of snow, more freezing rain and days of unusually low freezing temperatures have wreaked havoc on Leander and much of the state.

The power went out at the church and parsonage at 9:00am on Monday and was off for 30 hours. Many congregants experienced and are still experiencing similar power outages. Temperatures dipped to 5º on Monday and 3º on Tuesday, so staying warm in an unheated house was a challenge. We were blessed to have a fireplace and firewood at the parsonage, but many don’t have that.

With the power out, there was no source of news or updates – no TV and no wifi. The cell towers were suddenly overwhelmed, so the LTE data was scarce. I had to dust off an old radio from the garage as my only source of news.

For us, the power is restored for now, but a new problem has appeared. Both wells (no city water) at the church & parsonage have burst pipes, so no water supply. Call a plumber, right? Across the city there are thousands of burst pipes and plumbers are overwhelmed and prioritizing damaged houses. Also, due to the ice on the roads and lack of salt, travel is not recommended.

Members aren’t faring any better. Leander city’s water supply was compromised and first they ordered a boil water notice then they completely shut off the water at 5:00pm on Tuesday. It is still off as of this writing. We have several elderly members who are suffering through this and we are praying that they have no other medical situations as first responders are inundated and hindered by the hazardous roads.

Another system of freezing rain is forecast for tonight (Wednesday into Thursday). We have had to cancel our Ash Wednesday service and all other church activities this week.

We ask for prayers at this time.

In all of these trials we take comfort in knowing our Lord will never leave us nor forsake us. His love for us is best seen not in earthly blessings but in the fact that He gave his only begotten Son to suffer and die in our place, so that we could have the lasting blessings of heaven.