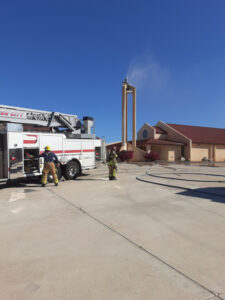 Just after 9am, this morning, a fire broke out at the top of the bell tower. The buildings were quickly evacuated. Firefighters responded very quickly and were able to prevent the fire from spreading. The cross has fallen into the bell tower structure and is suspended by its arms on the remains of the charred timbers. The bell is intact. The whole area under the tower has been cordoned off, because the structure is unsound and because mildly carcinogenic fire retardant was used to extinguish the flames. Neither the church building nor the fellowship hall suffered any damage, thanks to the efforts of the Lake Havasu City Fire Department.

The bell tower can be replaced, and we are reminded by the hymnist: 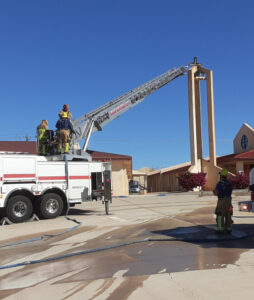 The Church’s one foundation
Is Jesus Christ, her Lord;
She is His new creation
By water and the Word.
From heav’n He came and sought her
To be His holy bride;
With His own blood He bought her,
And for her life He died.